They say that necessity is the mother of invention, but you can easily substitute the word  “leftovers” or “skepticism” for the word “necessity” and get the same result. I had an abundance of leftovers and skepticism so I was well poised for some inventing. I had to nourish my neglected sourdough starter last night, which left me, as usual, with about 8 oz. of uncertainty. I also had quite a bit of rapidly browning rosemary, half of a forgotten onion in the nether regions of my fridge, and some nice plump tomatoes. So, after a pleasant romp through some new and exciting bread books, I was back to haphazard experimentation with discarded sourdough bits.

A few weeks ago I began my sourdough starter according to the instructions in Bread Alone, but somewhere along the way I’m pretty sure that I flubbed up my proportions and no longer feel comfortable following the book’s sourdough formulas, as the hydration of my starter is likely a far cry from its intended state. This has left me with sourdough avoidance and guilt. When I removed 8 oz. of the starter last night, I replenished the remaining goo with more flour and water and put it back in the fridge with much lingering doubt. I threw 4 oz. flour and 1 oz. water into the starter that I had removed until it resembled something a bit stiffer but not too stiff (as Bread Alone instructs), and I left this on the counter to bubble, hoping that some disaster might befall it so that I could avoid using it altogether.

By the time I got around to thinking about using this intimidating mass of dough, I quite simply didn’t want to, and I put it in time-out in the fridge overnight. Then, the next day, with renewed Yankee thriftiness bolstered by guilt-inspired confidence, I decided I should man up and make an experimental loaf of sourdough something.

Here was my mind set behind the decision to make a sourdough focaccia: focaccia is flat and is supposed to look all knobby. It is also supposed to have tasty things scattered on top of it. If the dough is a failure and it comes out all flat and knobby, that is just superb. Even better, it has toppings behind which it can hide.

So, armed with a plethora of leftovers and a generous portion of skepticism, I began mixing up a dough. Since focaccia is typically a stickier dough with a higher water to flour ratio than, say, French bread, I was careful not to overdo the flour. I took my starter and mushed it up in 8 oz. water. I added 1 tsp. yeast because I wasn’t sure how potent my starter would be after all that neglect. Then I added 1 tsp. salt, 1 tsp. sugar, and 2 TB olive oil–the key to a nice soft focaccia. I ended up adding in just a little over 12 oz. flour, putting the dough at around 65% hydration–just where a focaccia should be, according to Mr. Reinhart. 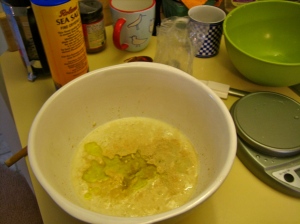 Since the dough was pretty sticky, I kneaded for a brief time, and then tried ye olde stretch and fold technique again. I stretched and folded, waited ten minutes, and repeated the procedure a few times until the dough had firmed up a little. 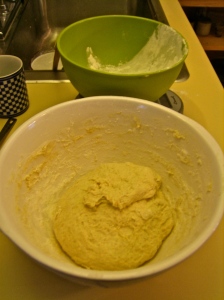 It was still sticky, but now manageable. I coated the dough in olive oil, and let it rise until it had doubled, which took almost two hours. Then I chopped the dough ball in half and began stretching each piece into an amoeba-esque form. The dough very gladly stretched in every direction the second I picked it up, and probably would have stretched to the floor if I hadn’t stopped it. I didn’t want to over handle the dough, though, because some nice big bubbles had formed that would puff up beautifully in the oven. I then busted out my leftovers and covered each piece of dough with a security mask, in case of impending disaster. Each one received a coating of olive oil and a sprinkle of salt, and one got rosemary while the other got tomatoes and onions.

After a brief proofing of maybe half an hour, I awkwardly transferred the elastic dough onto the 400 degree oven stone, making mutant amoeba shapes even more absurd than before. The loaves cooked quickly because of their thin nature, and after very little time, my ugly duckling dough had turned into beautiful swan focaccia. The air bubbles that I had carefully avoided deflating made a nice little landscape on the surface of the golden bread, and the bottom had crisped up to just the right degree–not nearly enough to break your teeth, but enough to support the loaf and prevent it from buckling. 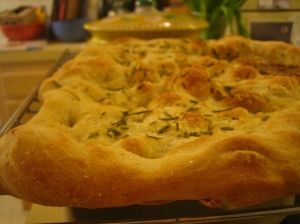 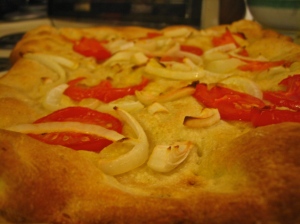 I ripped off a corner of the steaming loaf and was very pleased to see and hear a really nice crust and crumb. It tore easily and was filled with lofty air pockets. The bread was somehow simultaneously delicate and crispy–a hybrid soft-crunch that was very toothsome and satisfying. 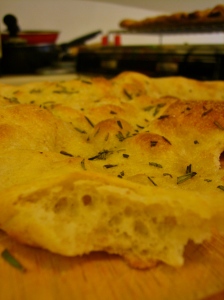 Although I was sort of winging it on the salt, sugar and olive oil proportions, their flavors seemed well balanced, and were out-shined anyway by a slowly developing sourdough flavor that kicked you in the pants after a few moments of munching. I think because I neglected my starter for so long and made it spend the night in the fridge, the sour flavor really developed some strength. I personally enjoy a strong sour flavor on occasion if it is nestled in a nicely textured crumb, but if your taste buds are timid, you’ll definitely want to pay more attention to your starter than I did.

Regardless of your sourdough sensibilities, try experimenting! I’ve been following recipes and formulas pretty closely the last few days and it felt great to mess around and be foolish. Although I didn’t feel comfortable following any prescribed formulas because of my starter’s uncertain hydration levels, any dough that has been fermenting for a while is bound to add flavor and excitement to an otherwise straightforward bread, and should be added to the mix with zeal.