Were it not for Franklin and Eleanor Roosevelt, the home baker might still be suffering under the culinary tyranny of bland dinner rolls. Luckily, the presidential couple–evidently enamored of the Parker House Hotel’s extravagantly buttery bread offering–requested that a copy of the guarded recipe be sent to the White House kitchen. I can sort of see the appeal of recipe secrecy, but when the president of the United States rings you on the telephone and says he really likes your dinner rolls, and would you be so kind as to share your state secret with him, the game is kind of up. Needless to say, since this happy day in 1933, the Parker House roll recipe leaked into the home kitchen in various forms and to various degrees of authenticity, and began to butter people up all across the country.

I know I posted about rolls in the not-too-distant past, but I’ve been wanting to see what the fuss is all about with these Parker House rolls for a long time. According to the Parker House’s rather distinguished guest list (as culled from a brief online history blurb) it is quite possible that the following people munched merrily on this delicacy at one point in time: Ralph Waldo Emerson, Henry David Thoreau, Henry Wadsworth Longfellow, Charles Dickens, Babe Ruth, JFK, Ulysses S. Grant, the aforementioned FDR and his lovely wife Eleanor, Judy Garland, and the infamous John Wilkes Booth. What’s more–and this really floors me–Ho Chi Minh worked as a baker in the Parker House kitchen, and Malcom X as a busboy. So I would suppose that they were also munching on Parker House rolls on their lunch breaks. The list of famous potential roll-eaters goes on and on, which is to say that if all of these distinguished folks were fueling their political, poetic, theatrical, philosophical and literary conversations with these rolls, then they must be packing a hell of a punch.

Before it occurred to me that I could likely find the original recipe online and make the rolls in their most authentic form, I found a nice little recipe in Beard on Bread. I am glad that I decided to work from this version, because it turns out that the original calls for an even more absurd quantity of butter than that with which I was currently confronted.

I cut Mr. Beard’s version of the Parker House roll recipe in half, measured in ounces rather than cups, and generally mucked about with the construction of the dough, but the recipe is still fundamentally his. To begin, I made a small poolish, because even when you’re creating an enriched dough, it’s always worth it to add extra fermentation flavors. I combined 1 tsp. yeast with 4 oz. water and 4 oz. flour and let the whole thing get nice and bubbly over the course of a few hours.

Instead of making a sponge, as Mr. Beard next instructs, I finished mixing my dough completely after adding the poolish, since using both a sponge and a poolish would be unnecessary and would exhaust the yeast. (I suppose I could have just followed his instructions and skipped the poolish, but I wasn’t reading far enough ahead to realize that he already had this step covered). 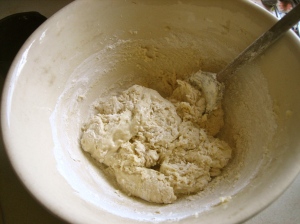 I kneaded away on a nice spacious counter top in a not-so-tiny (i.e. not my) kitchen until the dough was soft and supple. 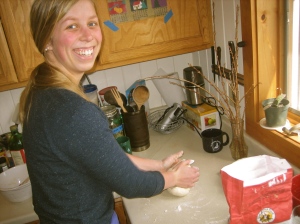 I had made the dough early enough in the day that the final rise could be a colder, slower rise, allowing a few more flavors to develop during this step. Since the day was so warm, it was actually a challenge to find a cool enough spot for the dough to rise slowly. Luckily, my guest kitchen was outfitted with a handy little tool that I now wish to add to my own collection of trusty gadgets, and that aided my quest for the perfect temperature. 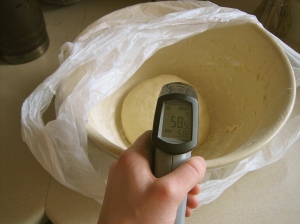 After taking a nice long while to double in size, my rich dough was ready for some exercises. 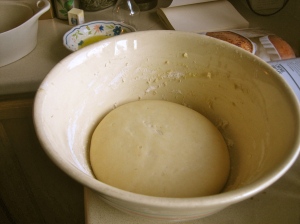 Instead of shaping each roll into the traditional Parker House shape, I stuck with my personal favorite–the pull-apart roll–and forced all the little dough balls into cramped quarters. 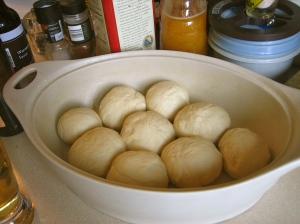 Again, I made use of some cooler temperatures to slow down this final proofing stage, and stuck the whole unit in the fridge until it was baking time. The rolls were clearly very eager to hop in the oven because even in the fridge they climbed rapidly up the sides of the baking dish and rose with alarming speed. At the last minute, I brushed the whole lot with a slather of butter (just to appease the Parker House roll gods) and stuck them into a refreshingly large oven, set to 375 degrees.

After maybe 20 minutes or so, a golden island of dough had begun to peek over the top of the dish and the sight was most pleasing. 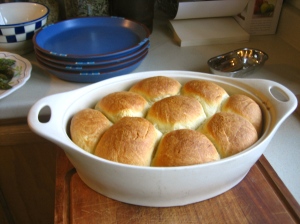 Unfortunately, at this point, I became so engrossed in the act of eating dinner that I neglected to photograph the beauty of the interior bits. Suffice it to say that this roll is not for the faint of palate. The light, fluffy, tender crumb with a brilliant network of tiny air holes disguised a killer rich flavor, replete with sweet, milky, buttery goodness. As the reigning vegetarian at the table, I found that the rolls became my primary meat substitute–not for lack of other delicious dishes, but simply because they seduced my taste buds. I now completely understand why, according to the record, composer Jacques Offenbach broke into song when devouring these lavish rolls at the Hotel, singing “Parker rolls, Parker rolls, how I love you.” 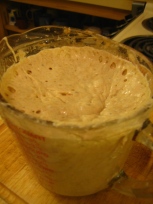