I never thought about the possibility of this occurring, but today, I looked up a specific word in my trusty Oxford American Dictionary and it just happened to be the very last word in the dictionary. I felt like I’d won a prize and that bells would start clanging and confetti would rain down on me as my finger rested triumphantly on this famous last word. No such thing happened, but it was somehow a very satisfying experience to have sought out the last alphabetically-ordered word in the English language. I thought it would be an obscure and scientific-sounding consonant cluster like Zzyxglene XZ-2 or something. Instead, it is a pleasant little word that is just as fun to look at as it is to say: zymurgy. And this whole story would be completely irrelevant if not for the fact that zymurgy is the study or practice of fermentation. Which is to say, in a roundabout way, that today’s bread made really excellent use of the fermentation process. So much so that I was inclined to poke around and read more about fermentation, naturally leading me to this excellent word, which is one that I will now almost certainly try to use in conversation at least once in life.

What made today’s bread so delicious was that two fermentation approaches were utilized in one dough. Not only was the signature Reinhart move employed (overnight refrigeration) but so too was a starter used. In this case, the starter was a pâte fermentée, which, unlike a biga or a poolish, is a legitimate and complete bread dough in itself. Since I didn’t have any old leftover dough to pop in my new dough, I made a small fresh batch and let it ferment at room temperature for a good long while (although an overnight in the fridge couldn’t have hurt the flavor). Armed with this bubbling beauty and a plethora of ingredients, I was ready to tackle Reinhart’s Pane Siciliano, which I consider to be the most beautiful loaf in all of The Bread Baker’s Apprentice. 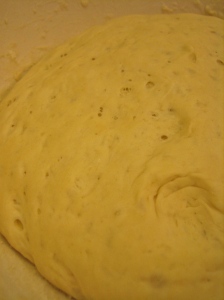 At this point I could already tell that the bread was going to be scrumptious just because it felt so heavenly underneath my palms. I could have carried on kneading all night, but stopped myself after the usual 10 minutes, and left the dough to ferment at room temperature until it doubled. 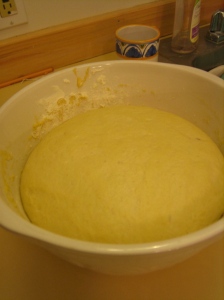 I took my doubled dough and chopped it into three pieces (with ease, might I add, thanks to the generously gifted dough scraper). I then began the process that attracted me to this particular loaf in the first place: rolling and spiraling!

I think I am going to shape every subsequent loaf into a spiral for the rest of my bread making days. It is very satisfying and I suggest you give it a go. I stuck my three scrolls into the fridge after covering them with a bag to retain the moisture, and let the second part of the zymurgy magic take place overnight. When I pulled the dough out of the fridge the next day I found that my bread had somehow over-proofed a bit in my fridge. Instead of nice svelt periwinkles, I had a tray full of chubby rogue snails living life on the edge after having busted through their shells. Apparently, my fridge likes to freeze the mesclun mix on the top shelf, but is happy to provide my bottom-shelf dough with enough balmy weather to induce rapid overnight inflation. Luckily, the over-proofing wasn’t drastic enough to cause deflation, so I quickly sprinkled some sesame seeds on top and popped those snaily monsters into the 450 degree oven.

Before long, the fruits of the fermentation labor paid off, and a beautiful golden crust formed from all of the freed sugars within the dough. The scroll shape got lost in the baking, as I assumed it would after the over-proofing blow-out, but the bread still had a nice oven rise and looked quite lovely. 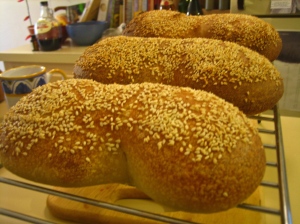 The crust was thick and crackly and caramel colored and it warmed the cockles of my heart, whatever those are.

If you’ll excuse another etymological tangent, I just happened to glance at the dictionary again to see what it had to say about the cockles of my heart. Instead of finding my answer,  I found that cockle (the verb) means to “bulge out in certain places so as to present a wrinkled or creased surface; pucker.” And wouldn’t you know it, this derives from the French coquiller, which is to “blister [as] bread in cooking.” Well, well, dictionary, you certainly have been most enlightening today. I still don’t know why we refer to the cockles of our hearts (perhaps because cockles are bivalves, and our hearts have valves…?) but I like to think that cockled bread warms my heart anyway.

Cutting into this loaf was quite lovely, as a symphony of crackles was unleashed against the edge of my bread knife. The crumb was light and tender (although a little less lofty than it should have been, again due to the over-proofing) and just begged to be spread with a pat of butter. This I did in short order, and was soon munching on a really, really tasty piece of bread.

I have to say that this is probably my absolute favorite bread so far. I love the flavor of the semolina flour, the gentle contribution of the olive oil, and the delicate sweetness of the double fermentation. The texture was both chewy and soft and the crumb was so moist. The sesame seeds were an excellent added crunch, but the real star of this loaf was the flour itself. If I ever doubted before, I certainly won’t again–time is the most important element in creating a delicious loaf of bread. When in doubt, ferment! (Or zymurgize?)