I realize that there are some pretty serious pizza dough pioneers out there, but I would like to submit that our very own Irma, of the immortal Joy of Cooking, knows a thing or two about making a pie in a pinch. Obviously, in an ideal world–where all doughs are fermented to perfection and flavors abound from the flour alone, aided only by a few choice additives–I would have had enough foresight to make my pizza dough eons before I needed to bake it, thus providing a sufficient time frame for said fermentation. However, in a realistic world, I found myself in need of a pizza dough about three hours before I knew I would find myself in need of a pizza. Since I’m not willing to starve myself in the name of fermentation, I turned to Irma and her pretty stellar pizza dough recipe for those who can’t plan ahead.

In a jiffy, I combined:

I kneaded for a good 10 minutes and ended up with a nice soft dough.

There is a fair amount of yeast in this dough, since it is intended to be a quick riser and not a slow fermenter. With this in mind, I didn’t mind taking the cheater’s time crunch route by sticking the dough in my slightly warmed-up oven to expedite the rising process. I knew I wasn’t going to get a lot of flavors out of the flour, and I was ok with that–the dough was still going to be lovely and delicious. In Rombauer I trust. After about two hours in the warm oven, the yeast gang had used its force to expand into the glutenous strand territory, and it was ready for some toppings. They say a pizza is only as good as the crust, but there is really no denying that delicious toppings are kind of important. Homemade red sauce, a nice sharp cheddar, and some Applegate pepperoni (for the pepperonitarian in us all) got nice and friendly with the beautiful, smooth olive oily dough base. I intentionally added as little flour as I felt comfortable using when making the dough so that it would be elastic and supple and easy to stretch, and it definitely met these expectations. 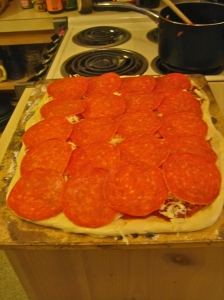 It’s a bit hard to see what the dough is like under this sea of meat, but I can affirm that it felt and looked very promising for a two-hour quick crust. I stuck this smothered masterpiece into a 425 degree oven and baked it for what felt like a good long time, although I don’t honestly remember how long it took (perhaps 30+ minutes?) When it emerged it was crisp and crackling and all kinds of melty. 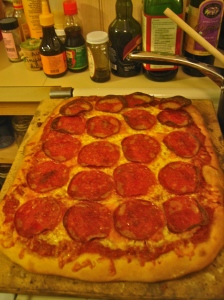 The dough puffed up just enough to provide a sufficient base for the cheesy madness going on above, without being overwhelmingly thick and messing up my preferred crust to toppings ratio. The whole thing was chopped up and demolished with great immediacy, and I almost forgot to stop and take a moment to evaluate my crust–the only part of the pizza that actually pertains to my flour, water and yeast theme. From what I remember in my pizza delerium, the crust was nice and crunchy on the outside, and soft and rich on the inside. It had a definite flavor (i.e. yeasty, olive oily and salty) that supported the tasty trio on top quite nicely. A lot of quick pizza doughs end up very, well, doughy and thick and flavorless. This particular dough could almost have fooled me into thinking that a bit more time had been invested in it, as the texture and flavor were both so pleasant. Alas, my short term memory isn’t so terrible as to forget that the dough had only been started a matter of hours earlier.

I accept the fact that not all doughs are created equal, and that a dough that’s been given a long fermentation at a lower temperature will always out-perform a quick dough. However, it’s impossible to replicate a 24-hour fermentation in only 3 hours, and, being human, we sometimes need dough in a pinch. In these instances, I find that Irma is my go-to pizza dough lady, and I am more than happy to crack open the Joy and use it as it was intended to be used–for regular ol’ people making regular (or even stellar) ol’ meals. 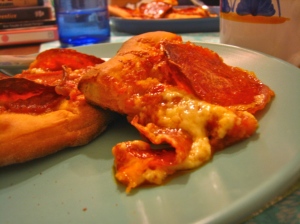